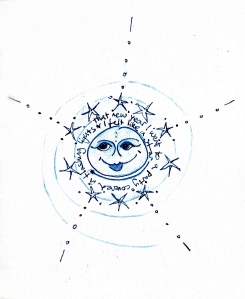 So was it a white Christmas?

There was snow on the ground and had some some fantastic moments: trudging through the snow with Mr F. for hot chocolate and Christmas lights on Christmas Eve, delicious roast goose, catching up with a ton of friends and family members. But there were also shades of grey. The cold really got to me (our house is never warm at the best of times), there were the ups and downs  of spending time with relatives, Mr. F got a bug just before our New Year party, I was officially a year older!

Dr. Who wasn’t exactly cheering either. Was rather traumatic – David Tennant took two episodes to snuff it,  going through several breakdowns in the process. (And he’s left the series for good. V. sad!)

And now,  slightly hung over and paranoid, have suddenly been flung into a new year.  This week, have been facing up to what 2010 means: grim weather, cabin fever, the effort of getting myself to work every morning. (Why does my mind seem to be asleep all the time?) Yes, the last leg of “State of My Heart,” has to begin! No small task.  I don’t seem to be anywhere near doing that at the moment.

Was going to write a list of new year resolutions. But don’t feel like it. (Who keeps them anyway?) So instead, am going to banish depressing thoughts by thinking of the ten best things that have happened in 2009:

1. Getting my life  and friends back – after travelling round the world for six months.

4. Receiving an “outstanding” in an OFSTED inspection.

6. Mountain biking in Aviemore. (You could go cycling straight from the tent.)

7. Mr. F starting his own business.

9.Writing all the way up to magic chapter twenty five!

"Success is not final,
failure isn't fatal,
it's the courage to continue that really counts."
(Winston Churchill)