I have a theory – if look forward to something too much you’re bound to be disappointed, it can’t possibly live up to all the anticipation and excitement. I had to wait almost a year for this show to come round. And I was proved wrong – it exceeded all my expectations.

Amazing – even before anyone came on stage!

For one thing – Wembley is an incredible venue to go to see bands. It’s such a mighty building, I lost my breath just looking round the empty stadium. The sound is also absolutely amazing, much better than when I went to see them on their arena tour at the end of last year – it packs such a punch and the clarity is simply jaw dropping.

And another thing – the support acts couldn’t have been better. Sunny, optimistic, Andy Burrows,“I Am Arrows” was absolutely perfect for a late summer afternoon – we folks up in the stands loved the cover of “Everyone Wants to Rule the World” – grandiose, OTT White Lies ( Harry McVeigh’s voice was like an entire army of people singing) were wowsome and as for Biffy Clyro? They almost blew Wembley away.

After hammering out a staggering version of “That Golden Rule,” they had us hanging on to their every move; their songs sounded incredible, they were rich, expansive and filled the whole Stadium. “God and Satan” was possibly one of the best moments of the evening – the sound and singing absolutely perfect, just as dusk was beginning to fall. The only disappointment was, no-one in my section of the stadium was into them, so I had a rather lonely head-banging session. Oh and I miss the dark hair, Simon!

And onto the main reason for the evening of course, Muse. I went to see U2 last August on their “No Line” stadium tour but I somehow enjoyed this more – these three strange guys from Teignmouth somehow seemed to reach out and connect better to the audience. Or to me, anyway. I much preferred this show to when I went to see them back in November even; they seem to have grown into their “Resistance”songs. The sound was stunning especially in “Ruled by Secrecy” and “United States of Eurasia,” “Undisclosed Desires” was tremendous with the three of them spinning round on the flashing UFO and “Take a Bow” stripped down and moving. Only one song that didn’t sound quite so brilliant – “MK Ultra,” which was a bit slow and off kilter.

Topping even those though were, Exogenesis 1 (always fab) and the enormous inflatable UFO – from where we were sitting it looked real, we couldn’t see the men pulling it round from the stands, whilst“Starlight” and “Time is Running Out” had me coming over unexpectedly emotional. They sounded hymn-like, as if they’d been round forever. “Unnatural Selection” also had tremendous kick, it was definitely my favourite of their heavier songs on this particular occasion.

There’s something strange about Muse – you don’t have to be near them to get the most out of going to see them, Matt, Dom and Chris were no more than shimmering blobs on the stage – but get this – it didn’t matter.

Matt has said in Kerrang recently that the audience “don’t see (the band) as being famous people” and that “there is no separation between the band and (it’s audience).” (Kerrang 25.9.10.)

Think he’s right, Muse really are all about the music – it somehow manages to stretch out and burn through every nook and cranny, bamboozling every single member of the audience, it doesn’t matter how vast the stadium is. So why isn’t that true of all bands? Why do you normally have to be up close to them to feel you’ve got the full experience? It’s definitely something to ponder…

Thank you Muse and Biffy: This is one of the best concerts, if not the best, I’ve ever been to. It’s up there with my best life experiences – easily equal to swimming on the Barrier Reef. 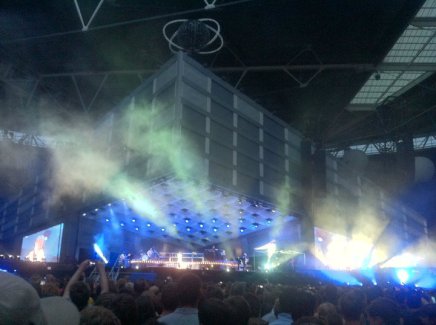 Map of the Problematique

Time is Running Out

"Success is not final,
failure isn't fatal,
it's the courage to continue that really counts."
(Winston Churchill)